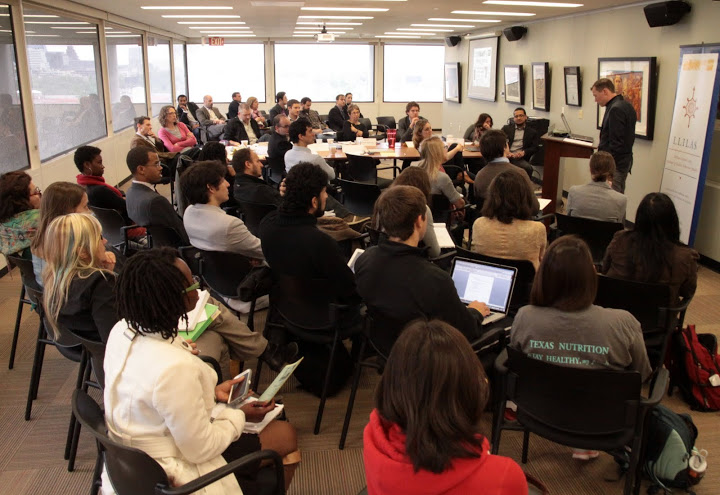 Last week, the Department of Sociology – in conjunction with the Teresa Lozano Long Institute of Latin American Studies, the Rappaport Cenntennial Professorship of Liberal Arts, and the Office of Graduate Studies – hosted a collaborative workshop that offered a space for students, researchers, and

professors to come together in the name of productive conversation, meaningful work, and camaraderie.  The workshop featured the research of scholars from sociology and anthropology whose ethnographic work offers significant insights into the complex ways in which interpersonal violence is shaping the lives of those living at the urban margins in contemporary North, Central, and South America.   Participants ranged from burgeoning new voices such as Matthew Desmond and Alice Goffman to the “giants in the field” Nancy Scheper-Hughes and Philippe Bourgois, who were featured in the final keynote session.

to their work.  To that end, students in Dr. Javier Auyero’s Poverty and Marginality in the Americas seminar were offered the chance to serve as discussants for the papers presented at the workshop.  Your faithful blog editor tracked down a few of these upcoming intellectuals and managed to get some final reflections at the end of a productive, stimulating, and tiring week:

This past week I had the privilege of serving as one of seven graduate student discussants for a workshop on Violence at the Urban Margins. The workshop brought together a range of scholars to discuss ethnographic work in progress concerning violence in the Americas.

One of the themes that emerged during the workshop was the “moral economy of violence.” The moral economy of violence refers to the idea that the forms of violence that occur in a given context have their own particular logic, one that is shaped by specific historical, social, political, and economic conditions, but also by the perceptions and attitudes of the specific actors involved. Whether such violence occurs in the relative absence of the state or through the active presence of a hyper-militarized state can dramatically affect the localized meanings and functions attributed to different forms of violence, including which kinds of violence are deemed “acceptable” and which are not, For example, the violence perpetuated by a neighborhood gang may be viewed as a source of protection or danger (or both), provoking fear or solidarity depending on the precise nature of the interactions that gang members have with their surrounding community.

One of my takeaways from the workshop is that understanding the production of localized cultural logics concerning violence is a critical component of grasping its myriad effects in the daily lives of people located at the urban margins. However, explorations of these internal logics must be accompanied by similarly nuanced analysis of the political economy surrounding the incidence of violence. Such an analysis, as several workshop participants pointed out, must attend not only to the changing actions of the state (which are often quite contradictory) but also to a number of other factors, including: the contours of the international drug trade, the expanding role of international corporations, and the ways

that international financial institutions such as the World Bank and the International Monetary Fund have circumscribed the available options for many governments throughout the developing world.

On a personal level, the workshop was an incredible space for intellectual exchange and spirited dialogue and reflection with other scholars, and I am very grateful that I had the opportunity to learn from them, and to participate in the conversation on this critical topic.

The workshop was fun and inspiring. Watching these big-shots fight over ideas (e.g. What is agency and why do scholars keep looking for it? Can some people lose it completely?) made me think of a wrestling contest – with some of the intellectual stimuli that the latter usually lack. It was a refreshing break from the studious and solitary routine of preparing for comps. And I enjoyed the opportunity to take part in the “fight” myself by discussing one of the papers. My favorite moment, however, took place during the evening, at Javier (Auyero)’s house, where the wrestlers were mingling in a much warmer manner, helped by beer and wine. I’ll never forget Philippe Bourgois mimicking himself as a graduate student, some thirty years ago, running after the agrarian reform in Central America – first because it was Philippe Bourgois, and second because it evoked the excitement and sense of purpose that any young sociologist should feel about her work.

Participating in the Violence at the Urban Margins Workshop meant many more activities than just serving as the discussant on a presenter’s paper.  It meant picking participants up at the airport; eating breakfasts, lunches and dinners together; driving speakers back and forth between their hotels and the conference.  And it was this variety of opportunities to share ideas, laughs and constructive criticisms – about the conference topics, the academy, or whatever – that marked the highlight of the conference for me.  I not only had the

opportunity to perform academically (serving as paper discussant and practicing my “elevator schpeel” while driving), but I also had the opportunity to share real, human moments – over Torchy’s tacos, coffees or as we meandered through Austin traffic – with scholars I hold in very high esteem.

While there are many moments to cherish from the conference for me personally, the workshop and its unique format I hope will continue to serve as an alternative model for academic engagement.  That model worked to breakdown the hierarchies between junior and senior scholars, and spur collaborative dialogue.  Many agreed they had never seen anything like it.  Let’s hope it catches on. 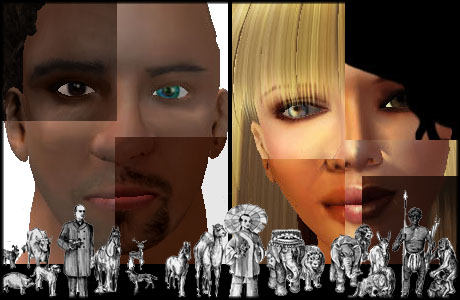 This past Friday, the Race & Ethnicity graduate student community group held its first meeting.  Founded in 2009, the group was created with three main goals in mind.  The first is to offer graduate students interested in race & ethnicity a supportive and collaborative place to workshop and discuss their work and papers in progress.  The second is to create a timely space where we can critically examine the ways in which race & ethnicity operate in current events and if necessary, make a political intervention into the discourse.  This was the case last spring, when several members of the race & ethnicity group along with Dr. Ben Carrington authored a Daily Texan column addressing the Trayvon Martin shooting.  Our final goal is to bring in respected and innovative scholars of race & ethnicity to discuss their works with the UT community.  To that end, the group has sponsored or co-sponsored talks by Drs. Joe Feagin, Adia Harvey Wingfield, John Sugden, and Beccy Watson among others.

This fall, we will be examining media representations of race broadly and the ways in which race & ethnicity are understood and discussed by the media in the 2012 election specifically.  In June, UT sociology professors Dr. Ben Carrington and Dr. Simone Browne co-edited a special issue of Qualitative Sociology entitled “The Obamas and the New Politics of Race” (currently available for free) and at our next meeting we will be discussing selected articles from the issue as a springboard into our semester-long conversation.  As part of our speaker series, in December we will be privileged to welcome Dr. Avery Gordon, author of Ghostly Matters: Haunting and the Sociological Imagination.  Dr. Gordon’s work demonstrates that past or haunting social forces control present life in different and more complicated ways than most social analysts presume and offers new ways to theorize the complex intersections of race, gender, and class.

We encourage any UT graduate students involved in race & ethnicity studies to e-mail Amias Maldonado (a.maldonado418@gmail.com) for details on future meetings, as we strive to create a multidisciplinary, inclusive atmosphere that encourages intellectual collaboration and academic community.