Marx warned us about the abysmal consequences of capitalism and the insurmountable greed of its ruling class. He maintained that capitalism, as an economic system, is unsustainable and self-destructive due to its inherent contradictions, which would bring about recurrent crises and, eventually, its own demise (Marx, 1848). With the modern exploitation of global markets, and the international movement of people from the (semi) periphery to the core (Wallerstein 1974), vulnerable populations are facing injustices that are the product of capitalist globalization and its crises.

Drawing from David Harvey’s (1982) argument that these are crises the system itself would attempt to resolve using what he calls a “spatial fix,” I frame the decision-making of migrant populations to leave their home countries as embedded in and responsive to the capitalist system. Specifically exploring whether these migratory flows empower migrants or merely reflect their marginality. I claim that migrant currents from the (semi) periphery to the core, and from the rural to the urban, serve as a sort of “grassroots spatial fix” to the widespread crisis of rural social reproduction migrant laborers face in their home countries. And while many find work that is economically empowering to them and their families (through the sending of remittances) they typically find themselves in polluted areas – raising the question of environmental justice for these migrant communities, which I will touch upon in my conclusion.

According to Harvey, capitalism is addicted to technological change and endless geographical expansion through economic growth, and it has found in globalization a spatial fix for its crisis tendencies. A “spatial fix” refers to a variety of strategies pursued by capitalists to overcome the inevitable crises generated through their routine activities (Harvey, 1985). He states that globalization today is nothing more than yet another round in the capitalist production and reconstruction of space, which is of course, not without consequences. Marx referred to the annihilation of space through time as a fundamental law of capitalist development (Marx, 1853), which is achieved through the conquering of new markets and innovations in the technologies of transport and communications (Harvey, 1985).

There are different ways in which capitalists make use of spatial fixes to overcome crisis, but the most common is expansion and the exploitation of new markets. When a crisis of localized over-accumulation and over-production occurs within a particular region, the solution is to export capital and labor surpluses to new territories. In other words, surpluses of capital and shortages of labor are fixed by the movement of capital to areas of labor surpluses and weak labor organization, or by importing cheap labor into centers of capitalist development.

But thinking more deeply, can the process of migrating from the (semi) periphery to the core serve as a type of spatial fix that immigrants themselves use to overcome a crisis of social reproduction at home? If so, it begs the question of who does this spatial fix truly benefit? The agency that immigrants practice in their own decision to migrate is important as a point of departure.

Overcoming a crisis at home by migrating from the (semi) periphery to the core in search of jobs can be interpreted as a sort of “grassroots spatial fix.” These migratory trends are common in rural areas after farmers either lose their farms or are pushed out of the agricultural market (Fitzgerald, 2011). In the case of Mexico, there are entire rural towns where the majority of working-age adults have migrated to the United States in search of wage labor. Through the process of migration to the United States, these people are economically empowered and are able to send remittances home, which in turn serves as a spatial fix for the immediate crisis at hand. Therefore, this begs the question: Who benefits the most from immigration as a “spatial fix?”

Using a Marxist lens, it becomes clear who benefits the most from migration as a spatial fix: the capitalist. As the most vulnerable population, migrants must deal with the tradeoff of exchanging clean living spaces for work and financial opportunities. It does not make sense to argue that migrant populations, like other communities that have been successful in protecting themselves from noxious environments, should be able to do the same when there are added layers of marginality (e.g. restricted mobility due to legal/language barriers and financial constraints) that they must negotiate every day. Therefore, using migrant labor as a technique to surmount capitalist crisis has proven more effective than the grassroots spatial fix used by migrants in attempting to solve their problems of social reproduction at home.

Be sure to read Dr. Néstor P. Rodríguez‘s new book entitled Guatemala-U.S. Migration: Transforming Regions, which touches on a number of themes introduced in this piece. 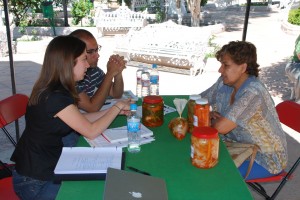