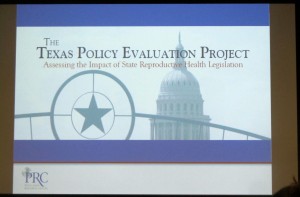 On September 12th, Amanda Stevenson was kind enough to discuss the work behind her recent paper in Contraception entitled, “Finding the Twitter users who stood with Wendy.” In the paper, Amanda examines Twitter chatter surrounding the Texas omnibus abortion restriction bill (Texas HB2) before, during and after Wendy Davis’ filibuster in summer 2013.  The implications of Amanda’s results and conclusions are eloquently outlined both in the article published in Contraception, and her op-ed piece “Twitter analysis shows not all Texans want abortion rights limited,” which was published in the Houston Chronicle.

In this post I will only briefly go over some of the major takeaways from Amanda’s talk.  I highly encourage you to read Amanda Stevenson’s articles for the full story.

Amanda discussed one of the first major events in summer 2013, now referred to as the Citizen’s Filibuster. On June 20th, a special session of the Texas legislature was held. On the agenda was a pair of bills that would ban abortions after 20  weeks of pregnancy, restrict access to medication abortions and require abortion clinics to become ambulatory surgical care centers. In response to the special session abortion-rights groups such as: NARAL Pro-Choice Texas, Planned Parenthood, and the Lilith Fund, quickly organized a “citizen’s filibuster.”

Approximately 700 people were organized in a flash, and the citizen’s filibuster was successful. Amanda showed that social media was important prior to Wendy Davis’ filibuster because it was instrumental in mobilizing people across the state of Texas.

If it weren’t for the success of the Citizen’s Filibuster, Wendy Davis would have never had the opportunity to stage her filibuster. And if it were up to mainstream media outlets, the world would have never known what Wendy Davis had accomplished that day. Amanda discussed how mainstream media outlets failed to cover the filibuster. Therefore, social media became the primary source of coverage on Davis’ filibuster – with YouTube providing live streams for the world to see.

3) Social media data is generated through a selection process

4) Hashtags can be a way to classify opinions 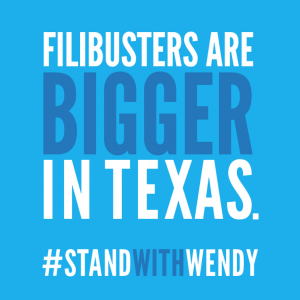 Trying to understand what people are attempting to convey through a tweet is a hard problem to resolve. One way this can be resolved, as illustrated by Amanda’s study, is to categorize tweets thematically using hashtags. For example, the hashtag “#standwithwendy” was a popular hashtag used through Davis’ filibuster. Users typically tag their tweets with hashtags to categorize them.

In general, users do not GPS-enable their tweets. It’s been found that it is primarily younger males in urban areas who do. Therefore, to not further limit her sample, Amanda generated location estimates for users in her sample. Amanda writes, “For each account whose tweets had GPS data, I collected 100 tweets from the Twitter REST API v1.1. For all accounts, I collected location data from user profiles in the form of text strings.” By combining GPS data from GPS-enabled tweets and whatever location data she could garner from geocoded text string, Amanda was able to generate location estimates for more users than if she had solely relied on GPS data.

What impresses me the most about Amanda’s work is that she is careful (both in her talk and her paper) not to overreach in her conclusions.  Moreover, her work is a great example of a project that elegantly employs qualitative and quantitative methodologies, something I aspire to achieve in my own work on social media. We all look forward to seeing more as Amanda’s dissertation develops. 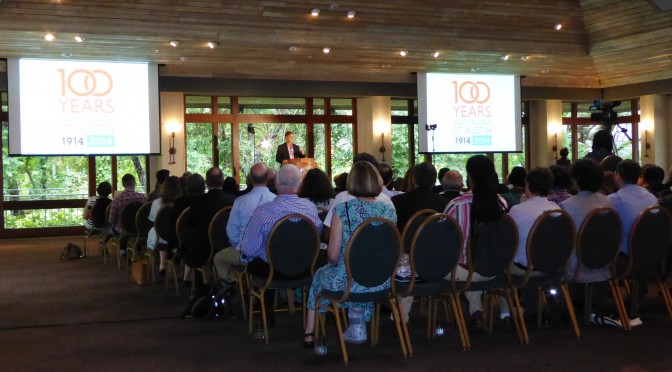 The Sociology department at the University of Texas at Austin turned 100 this year, an event worthy of celebration.  Many thanks to University of Virginia President, Dr. Teresa Sullivan (former Longhorn Vice Provost and proud Sociologist) for her talk on the future of Sociology and her help in launching our next 100 years. A video of our first 100 years can be found here.