During the “season of giving,” calls for donations are as plentiful as candy canes and eggnog. From bell-ringing Santas to toy donation drives, generous Americans make it the most wonderful time of the year for many charities.

What motivates this outpouring of good will? Americans donated nearly $300 billion in 2011, surpassing the gross domestic product of all but 33 countries in the world, according to a 2010 report by the Giving USA Foundation. Though the tradition of giving has existed for centuries, researchers have only begun to explore this question in the past 20 years.

At the forefront of this burgeoning field of study, social scientists at The University of Texas at Austin are examining the many reasons why some people give and some don’t. 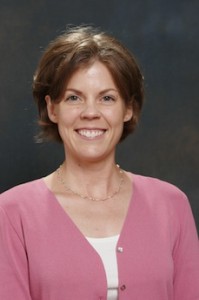 With a $148,000 grant from the Science of Generosity Initiative at the University of Notre Dame, sociologist Pamela Paxton, the Centennial Commission Professor of the Liberal Arts, is breaking new ground in the science of giving. Using data from two cross-national surveys, she’s examining how the social, economic and political structures of nations affect generosity. She is among the first social scientists to look at both the personal factors and larger societal forces that drive generosity.

Although she recently embarked on this study in 2010, she has preliminary results that suggest three factors influence our charitable impulses: Resources, opportunity and social norms. Paxton speculates the surge in giving during the holidays comes from an abundance of opportunities to get involved.

“Being asked to donate and volunteer makes a big difference,” said Paxton, professor of sociology and research affiliate in the Population Research Center and the Department of Government. People are also more likely to give because the social norm of giving is more pronounced during this time of year.”

The social pressure to give is especially prominant among people with money and education.

“Well educated people are more likely to acquire the civic skills necessary to volunteer, and they’re more informed about social issues like poverty,” she said. “Social networks are also very important. If you’re surrounded by people who donate and volunteer, you’re more likely to do the same.”

“Social networks matter – even if you’re not involved in church or a philanthropic group,” Paxton said. When we’re surrounded by a social network of civic-minded people, we’re more likely to volunteer because of increased recruitment and motivation. We might see these processes when a friend asks if we’d like to help out at a homeless shelter, or if we hear about a church food drive from an acquaintance.”

Researchers have long questioned the existence of altruism, arguing that if people “feel good” after giving or volunteering, it cannot be truly altruistic behavior. Yet Paxton isn’t interested in weighing in on the debate.

“Whether altruism exists doesn’t matter to me,” Paxton said. “What does interest me is the fact that generosity and altruism are central to a well functioning society. I don’t think you have to answer this question in a philosophical sense to understand the causes and consequences of generosity.”

Whether anyone can truly be selfless remains a mystery. However, Marlone Henderson, assistant professor of psychology, found that when people see others demonstrating altruistic acts, they are more inspired to get off the couch and into the soup kitchen.

Over the course of five studies, Henderson and his research team looked at the ways people are motivated to give their time and money to a charitable cause. Respondents were more motivated to give to a cause, he found, when they learned of others helping the less fortunate in different countries.

“When people learn about others who are going outside their own communities to help people in need – standing little to gain – they are reminded of their own apathy,” Henderson said. “But rather than feeling guilty, they see these programs as glowing examples of good will.”As part of the study, the 626 respondents were given descriptions of university student civic groups that help disadvantaged children in a school mentoring program. The programs are fictitious, however the respondents believed them to be real and were prepared to donate money at the end of the study. 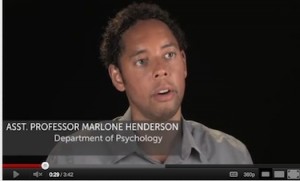 Watch Marlone Henderson, assistant professor of psychology, discussing the many factors that motivate people to give in this Knowledge Matters video.

“One of my favorite examples is a line from ‘Batman Begins’ when Bruce Wayne says, ‘People need dramatic examples to shake them out of apathy,'” Henderson said. “Although he’s talking about motivating himself to put on his bat outfit, the message is broader than that. We need something to shake us out of this apathy – and when we hear about something that’s different than what we’re used to, that motivates us to get involved and help.”

In another study, Henderson looked at how people decide to contribute to fund-raising campaigns. One of the most powerful factors that drives people to donate, he says, is the amount of money the campaign has already raised. 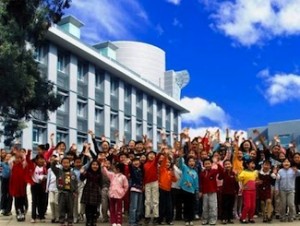 When soliciting donations, charitable organizations need to consider how much their constituants care about the cause. If they’re reaching out to people who already care, it’s important to emphasize what needs to be done to accomplish a goal, Henderson said.
In a series of studies of 1462 participants, Henderson and his team manipulated audience identification by describing the beneficiaries of a shared goal in distancing terms such as “they” or “them” or in close terms such as “we” and “us.” After the respondents were informed of how much money was still needed for a cause they cared about, donations almost doubled.

“When people hear about how much more is needed they’re more compelled to jump in and get involved, so this effort they care about doesn’t sink,” Henderson said.
However, he advises fundraisers to do the opposite when targeting those who aren’t particularly invested in the cause.

“The best way to motivate new people is to point out what others have done,” Henderson said. “When people see that a charity has already raised a good chunk of money – they’re likely to say, ‘Wow – people really care about this! Maybe I should care too.'”
To measure the effectiveness of this strategy, the researchers drafted a letter citing the success of a fundraising campaign. They found the donations more than tripled after the respondents, who didn’t identify with the cause, read the letter.

So what does this mean for civic groups, nonprofits and charitable organizations hoping to increase donations? Henderson said he hopes insights from his studies will help fundraisers craft better campaigns and tug at the heartstrings with greater precision. By showing examples of people demonstrating altruistic acts in foreign countries, or communicating a sense of urgency with their constituents, they can significantly expand their circle of potential donors.

Aside from philanthropic groups rallying for donors, what can be gained from these studies? For Paxton, the importance of this area of research is learning how to make the world work a little bit better.

“Social scientists often focus on social problems,” Paxton said. “But it’s nice for me to come in to work and focus on a social good. Personally, I enjoy this research because if we can increase a social good, it could potentially help a number of social problems at once.”
To help a new generation of generosity scholars learn about the broad causes of generosity around the world, Paxton is teaching a freshman signature course in the School of Undergraduate Studies during the 2012-13 academic year. Using a $100,000 gift, provided to the university by an anonymous foundation, students will decide how to allocate the money to a charitable organization of their choice. Since the challenge will be to decide where to give the money, Paxton will teach techniques to evaluate the effectiveness of charitable programming.

“This class has the potential to change their lives,” Paxton said. “It’s going to make students think about philanthropy at an early age. And they have the opportunity through this class to give a substantial amount of money to a good cause.”
From donating a sizable gift to a struggling nonprofit to dropping off a couple of soup cans at a food drive, any act of good will contributes to a well-functioning society. And people need to realize they don’t have to wait until the holidays to start giving back.
“During this time of year people are put on waiting lists to help out at soup kitchens,” Paxton said. “It’s great that philanthropy is pronounced during the holidays, but volunteering and giving is needed all year long.”