Every year The University of Texas at Austin hosts a conference on activist scholarship known as Abriendo Brecha (Opening a Path).  Abriendo Brecha brings together activistas, mujeristas, artistas, Nepantleras, scholars, and community members whose work is 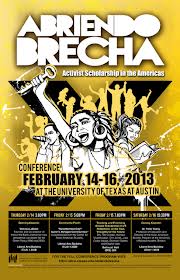 directed toward social justice and social change.  Celebrating the conference’s 10th anniversary, this year’s Abriendo Brecha’s focused on showcasing different approaches to activist scholarship, and the experiences of those who are involved in such efforts across disciplines, throughout the Americas, both inside and outside the (whitestream) academy.  We invited graduate student Erika Grajada to share some of her reflections attending the conference:

One of the most important things I took away from the conference is that challenging cultural (and academic) eugenics, as one of the panelists noted, requires that activist researchers think about new and creative ways of knowing (conocimiento), theorizing, and doing. It also requires that we ask new questions: How does a White middle-class researcher engage with and mobilize Chicana feminism and borderlands epistemologies without it resulting in a clumsy reappropriation and recolonization?  As feminist scholars, how can we privilege what Chela Sandoval calls differential consciousness in order to challenge stereotypical representations of women of color?  Should the engaged researcher relinquish “control” over the research project in an effort to discover new, perhaps more ethical ways of conducting research and engaging with underprivileged communities? As Mexican anthropologist Claudia Chávez Argüelles —who is currently conducting research on the massacre of forty-five Tzotzil children, women, and men in Acteal, Chiapas by paramilitary group members—pointed out: “community as another human being, not as an investigadora, which meant I had to learn to accompany them in their ongoing caminar.”

In the words of Chicana feminist Gloria Anzaldúa, “doing work that matters” often entails supporting and aligning ourselves with social movements and organizaciones de base that seek radical social change. What that engagement and relationship will look like will inevitably differ depending on one’s own sense of ethical obligation to the communities we work with. Today, while some of the conference attendees expressed feeling skeptical, critical, and thus constantly grappling with the idea of being an activist or engaged researcher, I left feeling reassured and hopeful by the words of Community and Regional Planning doctoral student Andrea R. Roberts: “silence is also a form of violence.”

Erika Denisse Grajeda is a Sociology doctoral student. Her research interests include informal economies and gender. She is currently doing research on women day laborers in New York City. When not bombarded with graduate school stuff, she likes to drink beer and cook.