Linda Tuhiwai Smith writes in Decolonizing Methodologies: Research and Indigenous Peoples that Western academia has historically engaged in a process of legitimizing “what counts as knowledge, as language, as literature, as curriculum and as the role of intellectuals” (Smith, 1999, p. 65). This process happens in an environment that envisions

researchers, data and the research process as cultureless and bodiless, “floating brains” if you will. The danger of doing research without thinking where our bodies and experiences fit in the process (with all of our privileges and disadvantages) is that our biases as humans will make it into our final conclusions, reproducing an intellectually stagnant body of knowledge that at best is very limited in its creativity and explanation, and at worst it has the potential of marginalizing the people we are writing about.

One way to address our limitations and acknowledge our humanity is to really think about our social location and our role as researchers. Pierre Bourdieu’s habitus is an excellent concept that can help to explain this dynamic and can prevent us from completely divorcing our bodies and biases from the research process. As researchers, we are embedded in a social landscape that has provided us with dispositions that help us make sense of the world around us. Our habitus also provides us with the manners through which we express ourselves, inevitably reproducing

our class, gender, sexuality, ability, race/ethnic identity, etc. However, we don’t always pay attention to how our disposition and manners affect the way we interact with and learn from the data we collect or the people we interview and observe. I am starting this blog series in an effort to provide a tool for researchers at UT Austin to practice reflexivity and improve their interpretations of their research as well as their interactions with research participants.

While it is hard to really analyze ourselves and identify our class, gender, racial and other biases, sometimes situations arise that give us a chance to put ourselves under the microscope. We may enter a classroom, a restaurant, an interview or a lab where suddenly something feels off and we are forced to respond through limited improvisations that reveal our social location as well as that of others. These are the times, particularly in an academic or research setting, where we can truly examine our approach to knowledge, learning, and conducting research. Ultimately, this information about ourselves can potentially help us compensate for our limitations due to our privileges, or turn our feelings of marginality into sites for theorizing.

This first post will contain one example of a time I have felt “out of my habitus” and forced to deal with my discomfort and conduct myself in a way that helped me grow instead of responding in a way that legitimized only my “expert” version of the social world. Recently, I attended the National Association of Chicano/Chicana Studies regional conference at UT Pan American in Edinburg, Texas. During this conference, I attended a workshop that 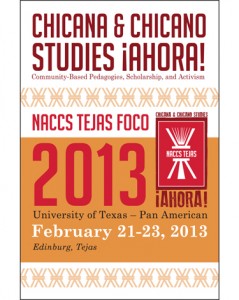 taught us to link the knowledge we have gained from our parents and grandparents to the way we approach education in our current position. Most of the over 20 people participating in the workshop were first generation college students, all of them were Chicana/o, and most of them were female. All had immigrated to the United States while they were still young and the ones who had been here for a few generations had been marginalized because of their race, gender and class while attending school. Many had parents who were farm workers or low-wage workers. As I filled in the questions that were part of the exercise, I realized I am probably a 5th generation college graduate, I attended private school in San Salvador (El Salvador), and came to the United States over 9 years ago to pursue higher education.

I was definitely “out of my habitus” during this exercise, and I felt irked. I had a hard time really making sense of why I felt out of place, or why I felt bothered. However, this discomfort was an opportunity for me to engage with my privileges and be very mindful of my manners (including the way I looked/dressed, my language, my accent, my responses, my body language, etc.). After hearing someone talk about how they felt like their family was jealous or angry because she was pursuing a higher education (calling her white-washed and insinuating that she looked down on them), I thought about the costs to entering higher education, as a student and as a researcher. The costs for the people in this workshop (true of me as well) involve entering a new habitus and learning or adopting new mannerisms and dispositions to survive a competitive, middle-class, heteronormative and in many ways white supremacist (colonizing) environment. These mannerisms shine through in our way of speaking and writing, in the way we relate to others, in the way we assign importance to academic matters, and in the way we distance ourselves from whatever image of “bad” student we have.

In a country where students tend to be labeled as “bad” when they don’t give school as much importance as we do, where having an accent or not speaking the right version of English marks people as deviant students, and where the students who are marked the most often as “bad” students embody a particular look and mannerisms (Urrieta Jr., 2009; Valenzuela, 1999; Yosso, 2005; Yosso, Smith, Ceja, & Solorzano, 2009), then adopting the manners and dispositions of “good” students inevitably results in coming off as pretentious (as Bourdieu describes the petit bourgeoisie). Moreover, being successful in education demands that we participate in a process that distinguishes between the “good” and the “bad” students, a process of hierarchization characterized in some ways by our behavior (which I have heard undergrads at UT talk about it as “white-washing,” telling girls they’re acting too much like men, Mexican Americans telling other Mexican Americans that they’re acting “too Mexican,” or labeling certain students as disingenuous or pretentious).

Thus, being out of my habitus made me be mindful of how I was coming across to the people in that workshop. While I was irked, I decided to really listen to what was going on, and this allowed me to make a connection between the process of schooling and how my position as a researcher is mired with pretentions and manners that can be and often are marginalizing to others. Similar to (though not fully alike) the way one of the participants expressed discomfort with the way her family and friends thought she was pretentious because she was getting a college degree, my “credentials” and manners can result in research participants feeling marginalized or looked down on. Being conscious of this is one way to: (a) not blame the people I interact with for being hostile or unsupportive in my research projects; and (b) find ways to prevent myself as much as I can from marginalizing research participants and other people around me.

Juan was born and raised in San Salvador, El Salvador. He has a BBA in marketing from UT Austin, and a Master’s in Women’s and Gender Studies from UT Austin. His research interests include Chicana feminisms, anti-colonial methodologies, Mexican American / Latina college students’ experiences, and Latinas and the media.