The Sociology department shares several distinguished faculty members with the  LLILAS BENSON Latin American Studies and Collections. Dr. Bryan Roberts has made an unparalleled contribution to the scholarship and communities of both and will sorely missed when he retires in December. Please take a moment to honor Dr. Roberts by viewing the tribute from LLILAS’ “International Colloquium on Social Citizenship in honor of Professor Bryan R. Roberts” 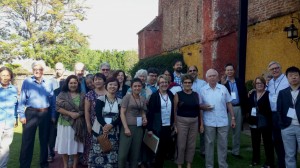 From Sociology Department Faculty, University of Texas at Austin

Bryan’s intellectual breadth, his natural curiosity, his international background and education, in combination with his extremely easy manner, infused the Department’s Latin American area with vitality and humanism for over thirty years. He contributed to far more than one area, though. He is a Sociologist in the best European and American traditions and his work combines deep theoretical insights and solid empirical work. He deeply touched the lives of hundreds of students and colleagues and he leaves a legacy that will animate the department and Latin American studies at UT Austin for years.
–Ron Angel, Professor of Sociology

First-hand witness to momentous transformations in Latin America, Bryan Roberts was able to make sense of them by deftly combining on-the-ground observations with high level theorization. Anybody studying urbanization, citizenship, or development in the continent is now standing on this sociological giant’s shoulders.
–Javier Auyero, Professor of Sociology

Bryan Roberts is an exemplary scholar who has had a crucial influence in the sociology of Latin America and in making UT a leader in the field. In addition to his own scholarly contributions to research on urbanization, migration, inequality, development, employment and informality in the region, Bryan has been a champion of bringing scholars from the English-speaking and Spanish-speaking worlds together. He has published extensively in both languages and, most importantly, he has led a number of collaborative research projects with Latin American scholars. The comparative nature of these projects has been crucial for the understanding of long term changes in Latin American cities. He has always tied detailed micro analysis of community change to the macro transformations experienced by the region. Bryan regularly returned to the communities in Guatemala were he conducted his early fieldwork in the late 1960s and 1970s to observe first-hand the changes brought by neoliberalism to those communities. As LLILAS director from 2006 to 2009, he expanded his commitment to collaborative research with Latin America and brought universities and research institutes in the region closer to UT. This also explains the huge number of friends he has made and the respect he commands in the world of Latin American social sciences.
–Daniel Fridman, Assistant Professor of Sociology

For those of us who have studied migration related topics he is definitely ‘maestro de maestros’ — he has mentored some of the most influential maestras and maestros in immigration studies in the social sciences. He is a kind spirit and will be missed.
–Gloria Gonzalez Lopez, Associate Professor of Sociology

Bryan has made enormous contributions to the Department of Sociology for nearly three decades and perhaps especially so in the graduate program. He has directed dozens of dissertations and served on many masters and dissertation committees. Over the years, he has given great attention to helping his students write high-quality dissertations and placing them into productive academic and non-academic positions following graduation. Perhaps most important, Bryan has been a model colleague and mentor. He is incredibly productive and smart, yet humble. He takes his work very seriously, but also has a great sense of humor and does not allow the seriousness of his work to override the joy with which he lives his life. He’s an academic superstar, yet he always pitches in to do his share of the grunt work that departments need to get done. And he gets along with everyone; he’s a genuinely nice, fair, and kind person who is as well liked and respected as it gets. Thank you Bryan…for all of your contributions, for one, but more than that, for being the humble, humorous, fun, hard-working, down-to-earth, fair, and kind person that you are. You will be missed.
–Bob Hummer, Professor of Sociology

Bryan has done an outstanding job opening roads for research in Latin America. In towns that I have visited in Mexico, Central America, and South America, people told me that Bryan had been there earlier. It is a privilege to follow in his footsteps.
–Nestor Rodriguez, Professor of Sociology

For almost thirty years, Bryan Roberts has anchored the program in Latin American Sociology at the University of Texas at Austin. Less well-known to outsiders, he has also been a mainstay of our programs in Sociological Theory and Ethnographic Research Methods. Bryan taught generations of qualitative researchers at UT. He is a multi-faceted scholar who communicates across scholarly divisions of geography, theory, and methodology. His geniality and collegiality have made the Sociology Department an exceptional place to work.
–Christine Williams, Professor and Chair of Sociology