Marcos Perez: ideas from the field after seven week in Buenos Aires

(The following are some ideas that have emerged as a result of my fieldwork, and that relate to part of my research project. They are quite preliminary, since I need to do a more rigorous analysis of my fieldnotes and interviews. However, they might be of interest for those whose focus is Argentina, Latin America, and poor people’s movements)

Monday, 2 pm. I am participating in a meeting of activists from a piquetero organization in a neighborhood of the Greater Buenos Aires. It is a rather small group, led by a few people who have much experience in the movement. They advocate for the institution of a revolutionary regime that combines the abolition of private property and the implementation of direct democracy. Despite this, when they talk they sound more like skilled social workers thank like radical militants: they mention different social programs, describe their dealings with state bureaucracy, and organize the distribution of food assistance.

Another organization, another scene. We are waiting to go to a demonstration against the national government. City officials have promised that a tramcar will be available to take us. But the tram is not coming, and we have been waiting for almost an hour. I start talking with one of the activists. He has been participating for a few years and receives a social subsidy managed by the organization. He says that many of his relatives do the same, but with other groups, some of which are supporters of the government. He tells me that the important thing is “to know who gives you more things, and go there”.

These have been common experiences in the seven weeks I have spent in Buenos Aires, and were commonplace in a previous instance of fieldwork I did last year. Everyone in piquetero organizations, from experienced activists to short-term participants, talks about “foodstuffs and plans” all the time. This is hardly a surprising finding, as previous researchers such as Julieta Quiros and Alejandro Grimson have reported it, but it points to a possible reason why these groups could not consolidate the momentum they enjoyed years ago. A combination of factors has placed piquetero organizations in a very difficult dilemma.

The piquetero organizations I study are based in very poor neighborhoods around Argentina’s largest city. The vast majority of its members live in extreme poverty and survive day to day through various means, in what Denis Merklen has called “the logic of the hunter”. At the organizational level, the main consequence of this situation is that unlike other social movements, piquetero groups cannot extract the resources they need to function from its members. The resources needed to sustain any instance of organized collective action in these poverty-stricken neighborhoods have to come from other sources. In other words, it is the welfare arm of the state (or whatever remains of it) that provides the goods and money needed to sustain mobilization.

However, political competition, the scarcity of resources, and the neoliberal logic of social assistance have resulted in a situation in which social movements cannot rely on universal policies or institutions. Instead, they depend on the arbitrary distribution of specific benefits by officials. That is, piquetero organizations have to struggle, protest, and pressure the authorities to obtain resources from social programs. In addition, they need to be granted the management of those resources. Through demonstrations and negotiations each group obtains “foodstuffs and plans”, that is, the regular provision of a certain amount of crates of different food products, and a number of positions in workfare social programs to be distributed among its members.

(Candelaria Garay, an Argentinean political scientist, makes the argument that it was precisely the targeted, “focalized” nature of social policies in the 90s that allowed the piquetero movement to expand so rapidly in the years prior to the crisis of 2001-2002)

In order to attain the demanded quota of resources, organizations have to display in the streets that they have the capacity to mobilize people with frequency. The more people the organization mobilizes, the more influential its leaders will be in dealing with state officials, and the more successful they will be in obtaining resources. 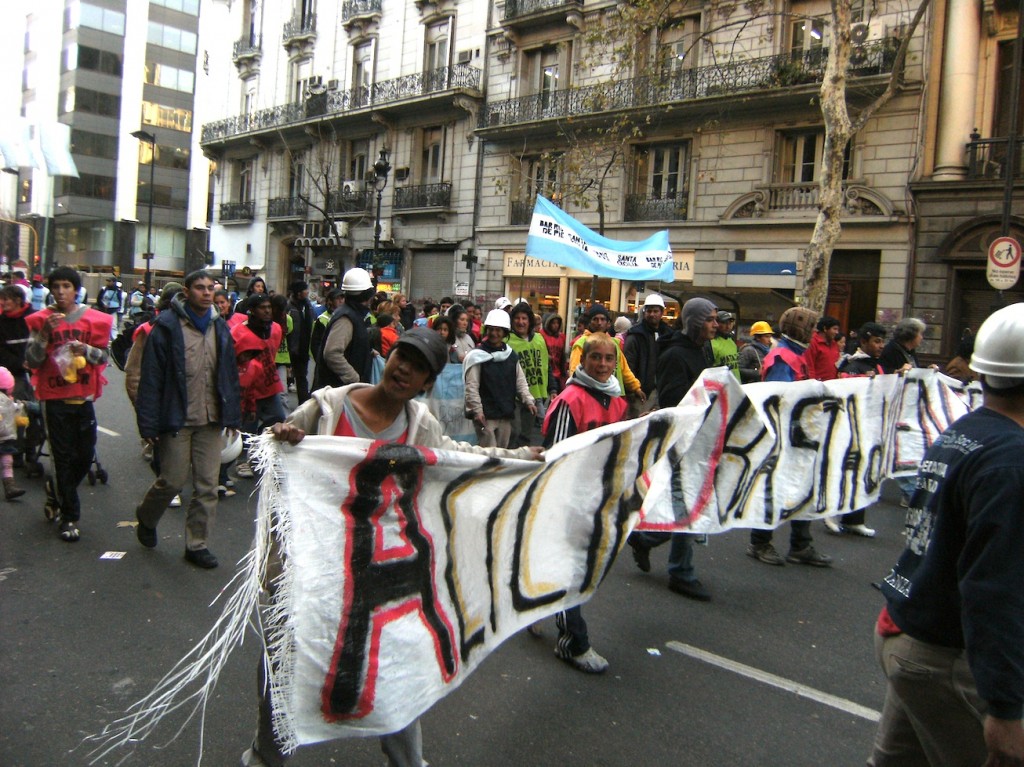 However, to be able to do this, organizations need to solve a collective action dilemma. My interviews and fieldnotes reveal that most people are reluctant to participate in public activities, some of which are very demanding in time and effort. Moreover, since organizations have to protest first and negotiate later in order to obtain more resources, it is frequently the case that people have to participate in demonstrations for a long period before finally being awarded a position in a social program. In order to deal with this problem, piquetero organizations are forced to provide selective incentives, both positive and negative. The former consists of the distribution of foodstuffs: every time the authorities dispense food products to the organization, its members separate a portion for the sustainment of soup kitchens, and distribute the rest to those who have participated in activities. In addition, those who do not receive a social subsidy are attracted by the prospect of getting one. The main negative incentive is the threat of having the plan, subsidy, or position discontinued if the member ceases to participate for a long time.

In sum, piquetero groups are immersed in a dynamic where “having people” is the most important thing. “Having people” means leading a certain number of individuals who identify with a specific organization and being able to mobilize them to demonstrations and other public events. It is the clearest measure of the influence of a particular leader or group. In this aspect they do not differ from other actors. As Javier Auyero showed in Poor People’s Politics, the main asset of different local referents of the Peronist party is their capacity to mobilize a number of people for demonstrations and primaries.

The dynamic I described above can be used to accuse piquetero organizations of being clientelistic machines. However, I believe that such an interpretation would be strongly misled. Firstly, the concept of clientelism is problematic, especially when used as an accusation. Condemning a group as “clientelistic” for organizing to demand resources that will allow its members to survive is illogical. Piquetero organizations need to pressure authorities to obtain food and social plans, and in order to do that, they have to solve the collective action dilemma they face. Can we reprove a group for distributing goods on the basis of participation, when it is precisely that participation that allowed the goods to be obtained in the first place? Most of my respondents seem to agree with the idea that those who made the most effort should be given priority in the distribution of the results of that effort.

Secondly, any criticism of the practices of piquetero groups needs to take into consideration the changes in social policy that placed them into that situation. Neoliberal reforms in the 1990s moved social policies from a universalistic logic to a targeted one, where specific programs such as conditional cash transfers emerged as a central component of the welfare apparatus of the state. This transformation created the conditions for increased arbitrariness in the distribution of social assistance by state officials.

Lastly, it is important to uphold the justice and dignity of material demands. Although mobilizing to demand social change seems more romantic than blocking a road to request the distribution of bags of rice, we should not forget that the latter constitutes a human right. As Julieta Quiros argues, if we respond to the accusations of clientelism by downplaying the importance of material demands (as some have done), we are accepting the basic tenet of the accusers: that “it is not acceptable to mobilize politically for a subsidy, a box of food, or 20 pesos”.

That being said, it is true that the dynamic described above causes many problems for piquetero organizations, three of which appear particularly salient in my fieldwork. Firstly, since “having people” is such an important asset, local leaders have a tendency to try to preserve their own group and are reluctant to make compromises. As one of my interviewees told me, “there was one time in which we even made a forbidden sign with the word ‘my’ crossed. Because everyone was saying all the time ‘my people’, ‘my place’, ‘my things’”. This situation generates frequent conflicts and has even led to divisions.

Secondly, given that the state is the main provider of resources, organizations end up being very vulnerable to shifts in policies and to decisions made by officials. For instance, one of the organizations I have worked with is a nation-wide network of activists with a significant mobilization capacity, and a very strong presence in poor neighborhoods all across the country. However, a recent decision by the national government to cut the provision of foodstuffs for soup kitchens has strongly affected it, and has forced it to engage in a series of large-scale protests that have been only partially successful.

Finally, the distribution of material incentives for mobilization has prevented many organizations from developing a large body of “core” activists on which the organization can rely regardless of the provision of goods. Having such a group of people is an essential feature, since it allows organizations to face challenges such as the suspension of social programs or harassment by rival political factions. Several leaders I interviewed complained about the difficulties in moving people from “participating due to necessity” to “participating due to commitment”.

In sum, the experiences I collected in my fieldwork seem to suggest that piquetero organizations are placed in a very difficult situation, which would explain the centrality of “foodstuffs and plans” in the discourse of activists. These are just preliminary ideas and need to be confirmed (or rejected) by a more rigorous analysis of the data I collected. Nevertheless, it is unlikely that this analysis will refute the fact that piquetero organizations fulfill a central role in the satisfaction of the needs of poor people. Regardless of their limitations, and the challenges imposed by the context in which they operate, the piqueteros “are there in the neighborhood.” Among other things, they teach literacy skills to adults and feed children, provide free sex education and counseling, demand for the provision of local services, and confront police abuse. More generally, they have been one of the ways in which poor people in Argentina have confronted the worst consequences of neoliberalism.