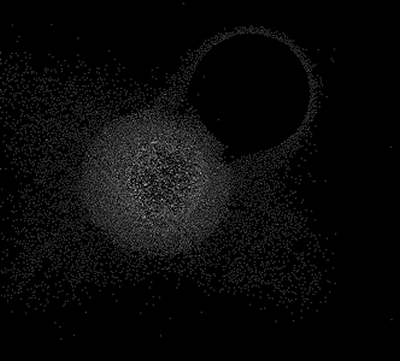 In Metaphysics Aristotle proposed the idea that a whole may be greater than the sum of its parts, meaning that from a simple set of relations the workings of a much more complex phenomenon can be described or predicted.

In the 1970s sociologists began avidly looking to biology, physics and mathematics to model social phenomena from population migrations, the spread of disease and terrorism, revolutions, to fashion and social media today. The key is in identifying the components or ‘particles’ of an event and seeing how they interact to achieve overall change, equilibrium or formation of new ways of operating, with varying factors such as the speeds and sizes of such ‘happenings’–much like how subatomic particles would interact, probabilistically speaking, under a given set of conditions. Research continues today as part of a vanguard of sociology into new models and new applications of these models to human social processes.

It seems to me that there is a fundamental level of metaphoricity that needs further address within such investigations. In determining the parameters of these models for application, what can sociology bring to the table–or is it relegated to being a secondary discourse, capitalizing on, ‘interpreting,’ the findings of other disciplines? Of course its pragmatic uses are great, but sociology as a field should have a metaphoric primacy, a unique perspective it offers not as a mere theoretical supplement to, but in possible competition with other ‘ways of looking at the world’ and speaking about the world. Perhaps the modeling of a ‘social physics’ (Comte) needs itself to be subject to a ‘feedback system,’ wherein the point of such a sociology is not merely to interpret the models, but to change them.