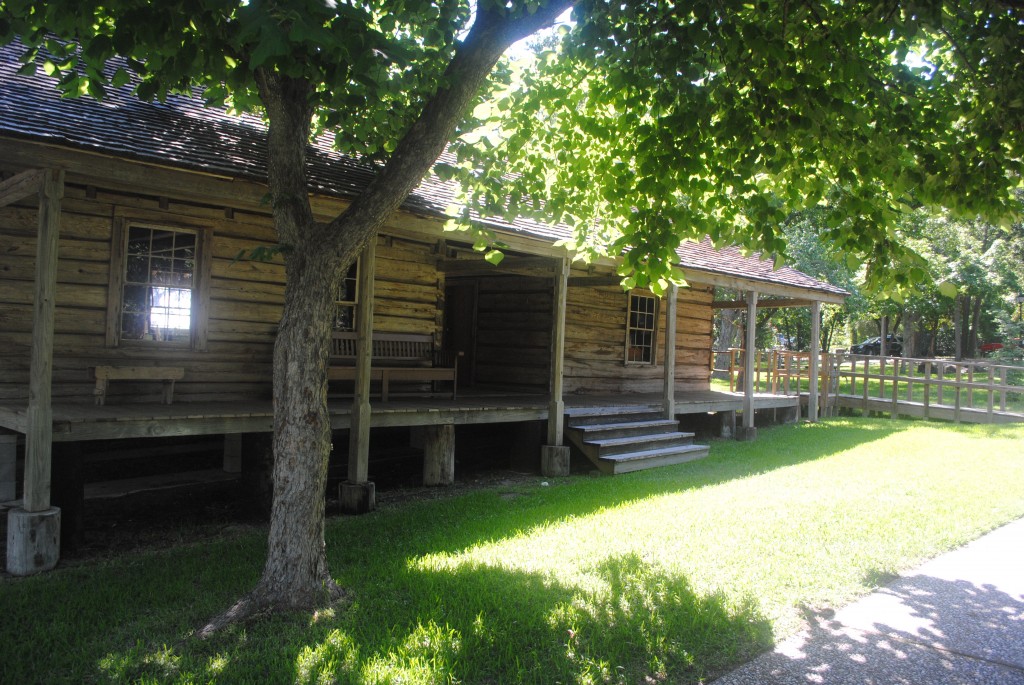 In an attempt to distance myself both mentally and physically from graduate life and sociology (a key skill to have if one is to successfully navigate the passage between the Charybdis of performing personal research an the Scylla of teaching/classwork responsibilities), I recently spent 36 hours in Huntsville, Texas. I opted to take the camera that my partner and I share and do what I love to do most: wander about taking pictures, documenting the beauty and banality of life.

Since many may not be familiar with Huntsville, it is largely known for three things: 1) it 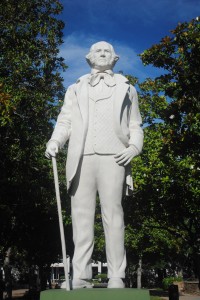 was the home of Sam Houston (See photo at right); 2) consequently, it is home of Sam Houston State University (SHSU); and 3) it is a hub for the Texas state prison system. I figured this would be a prime chance to observe life in a town where the prison was a central cultural landmark.

As has been documented by Foucalt (1977), the prison is site of ultimate domination: everything is observed and controlled. While the Huntsville units were not panoptic in the strict sense, the boundaries of this control were not limited to within its brick-lined walls. As Comfort (2007) illustrated, the controlling tentacles of the prison system extend beyond the lives of the prisons, shaping and regulating the lives of prisoners’ significant others and families. Indeed, the power of the prison system permeates throughout Huntsville, oddly juxtaposing its past and current history with the ideals associated with the man that made the town famous.

My first experience with the permeable boundaries of the prison domination complex was related to the very thing that I was using to temporarily free myself from the weight of graduate school: my photography. The most well-known and easily identifiable prison in the Huntsville complex (the Walls Unit) was within walking distance of the SHSU campus; you can see the prison from campus, and hear the sirens when shift changes are occurring

In the sticky East Texas summer heat, I wandered the town in the early evening to see what was within near the hotel. Initially, the guards were friendly enough: I waved hello to them, and they waved back. It wasn’t until the next day that I was to truly experience how the prison controls all who surround it, even if they know nobody inside.

The next morning, I wandered back to the prison. I noticed a bunch of men wearing white jumpsuits working on a drainage ditch. Having toured the (inter)nationally famous Criminal Justice program building, I recognized them as prisoners. Huntsville uses the prisoners as cheap (captive) labor; as Wacquant (2009) noted, the state uses prisoners as a source of cheap labor, a much-needed commodity in the neoliberal era. Indeed, these prisoners provide not only cheap labor for basic city maintenance (I saw my fair share of prison buses transporting workers throughout the city), but it also uses them to build and maintain the historical buildings that draw tourists in. Whether or not this is exploitative is up to the reader: these men are learning skills, but wages and choice are questionable (and some skills, such as rebuilding a log cabin from remains, seem anachronistic in the modern economy). 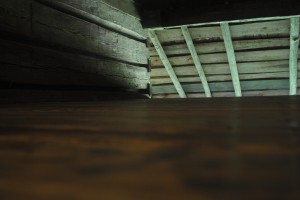 As I approached the front of the prison, a guard in a watchtower confronted me. It turns out that taking pictures of a prison is suspicious activity (in full disclosure, this makes sense based on my outward appearance: I am fully bearded, and was wearing sunglasses and a fatigued baseball cap). He told me that taking photographs of the prison was only allowed in one area; I couldn’t understand where that area was, but it seemed to be in the general direction of the front of the prison. I continued on my way.

When I arrived at the front of the prison, another guard confronted me. Again, I was warned about taking pictures of the prison. She seemed to indicate that the area allowing photographs wasn’t the front, but somewhere else; that being said, I better understood where I WASN’T allowed to take pictures (the other three sides). The interrogation didn’t end there: she wanted to know why I was taking pictures. I explained to her that I like wandering around and taking pictures, but this didn’t satisfy her curiosity; it wasn’t until I explained that I had never been to Huntsville before that she reiterated where I wasn’t allowed to take pictures and let me on my way, albeit with a suspicious gaze. I knew at that point that around each complex, the prison would dictate where I was allowed to go due to my possession of a camera.

These experiences make Huntsville a city of seemingly contradictory fame. On the one hand, the prison system dominates the local economy and rhythms of life. The prison employs many people, and prisoners supply cheap labor for the maintenance of the tourism industry (additionally, while I wasn’t able to make it, one could visit the Texas State Prison Museum). The presence of the prison is ubiquitous; its specter haunts and looms over almost every aspect of the town. However, the town is also well known for its association with Sam Houston, a key leader in the fight for Texas’ independence. The city thus constitutes an awkward juxtaposition for the tourist: it is a place to celebrate a hero and a group of people fighting for their freedom, while also highlighting their dependence on and enslavement by the incarceration system. Ultimately, this juxtaposition also symbolizes a sociologist’s relationship with society: while one can attempt to gain temporary solace from the sociological imagination, it can be difficult to turn off one’s mind, involuntarily illuminating the social world around us.

Comfort, Megan. 2007. Doing Time Together: Love and family in the shadow of the prison. Chicago: The University of Chicago Press.