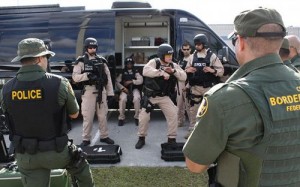 Agents from U.S. Immigration and Customs Enforcement train with the U.S. Customs and Border Protection in Arizona

Over at the London School of Economics blog, 5th-year doctoral student, Carmen Gutierrez, and former-UT professor David Kirk write on the relationship between  immigration and likelihood of reporting violent crimes. Their research challenges the notion that increased immigration leads to increases in crime, instead suggesting that anti-immigration rhetoric may, in fact, be undermining public safety. Gutierrez and Kirk argue that restrictive immigration policies “create potential mistrust of legal authorities who have the power to exercise immigration enforcement, such as deportation. As a result, immigrants may avoid the police—even to report crime and victimization—due to their fears of arrest and expulsion.”

Read more about their work here and in their co-authored paper, ‘Silence Speaks: The Relationship Between Immigration and the Underreporting of Crime’, in Crime & Delinquency!