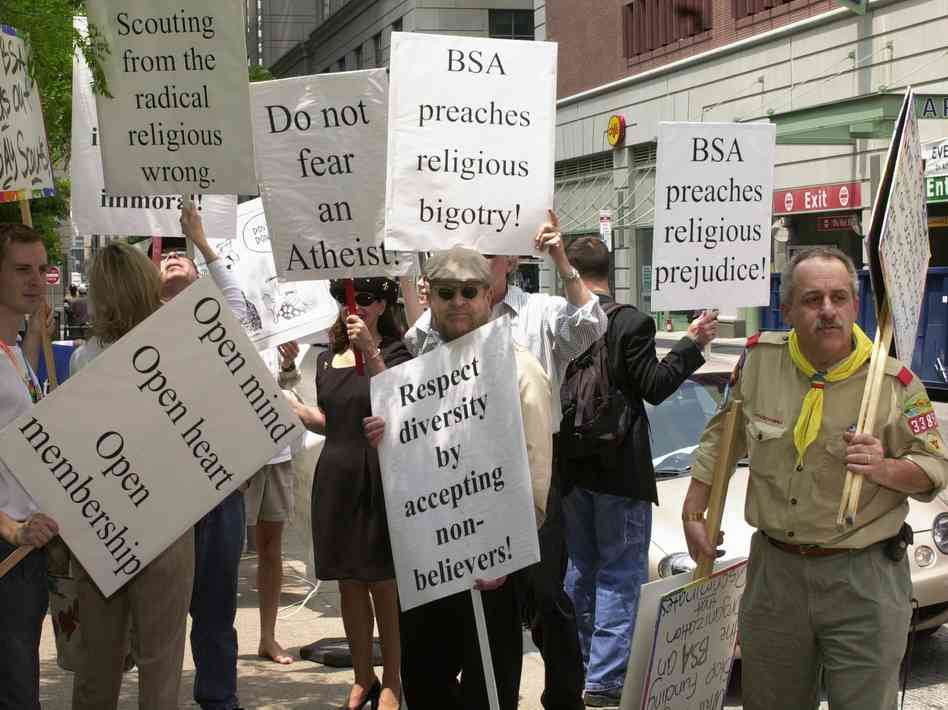 Over the past few weeks, the Boy Scouts of America’s policy on gay Scouts and Scoutmasters has been featured heavily in the news.  I am an Eagle Scout who studies masculinity here at the Sociology department and thus feel compelled to weigh in on this important issue.  But to properly unpack why heterosexuality is so near and dear to the Boy Scouts, we need to establish a bit of historical context.

Allow me to set the scene:  It’s the year 2000.  Y2K has passed, Britney Spears is still culturally relevant, and we’re still seven long years from the iPhone.  Over on the Supreme Court, the issue of gays and Scouting is already at hand.  In the 2000 case Boy Scouts of America vs. Dale, the court ruled that the Boy Scouts of America (BSA)  were legally able to exclude homosexuals from BSA participation under the constitutional right to freedom of association.  Because BSA operates as a private organization, the court saw exclusion as justified when “the presence of that person affects in a significant way the group’s ability to advocate public of private viewpoints.”  According to the court arguments, opposition to homosexuality is part of BSA’s “expressive message” and thus allowing gay male leaders or scouts would interfere with that message.

Which begs the question: What does “expressive message” mean, and why is homophobia part of the message?

Boy Scouts was first founded by Sir Robert Baden-Powell in England.  Baden-Powell formulated a militaristic and authoritarian vision for the British Boy Scouts, stressing obedience and duty.  Scholars have likened this version of Boy Scouts to a factory producing uniform men “under detailed specifications for particular uses [with] both supplied by a coherent ideology stressing unquestioning obedience to properly structured authority” (Rosenthal 1986).  Essentially, the job of Boy Scouts was to make “manly” men who would then slide easily into discipline-heavy, autonomy-light positions like factory work, middle management, and ideally the ranks of the military in the service of the British Empire.

In the transition from British Boy Scouts into the Boy Scouts of America, we see a reformulation of Scouting to fit its new American setting.  The secular and imperial social context of England produced a Boy Scouts that was equally secular and aspired to produce future soldiers for the British Empire.  In the US, we took the militaristic garb and organization, added copious amount of quasi-religious morality (aided by the essential part churches have in hosting Scout troops), and put it in the service of shoring up a “crisis in masculinity.”  Hold on a sec:  crisis in masculinity?  Where did that come from?

Let’s think about the beginning of the 20th century in the United States.  Industrialization and wage labor were fundamentally changing domestic and work lives.  Instead of a family owning a farm and working it together to put food on the table, men now went to work to earn the money that would put food on the table while their wives sat sequestered at home.  The creation of separate (public/domestic) and unequal spheres of life for men and women created a new basis for male privilege.  At the same time however, fewer men owned their businesses, their homes or farms, or even controlled their own labor.  According to sociologist Michael Messner, “these changes in work and family, along with the rise of female-dominated public schools, urbanization, and the closing of the frontier all led to widespread fears of ‘social feminization’ and a turn-of-the-century crisis in masculinity” (Messner 2007: 35)

With the “feminizing” effects of the big city, female teachers, and a life of waged labor seemingly entrenched into modern social life, men looked for ways to “masculinize” boys early in their development.  This, they hoped, would inoculate them against the deleterious and emasculating winds of 20th century existence.  And HERE is where Boy Scouts enters stage right.  Boy Scouting in America – like its British counterpart – was created with the express purpose of “masculinizing” boys.  We might think of Theodore Roosevelt as the personification of the kind of masculinity the BSA was hoping to produce: strong willed, adventurous, self-sufficient, knowledgeable about nature and camping, definitely not feminine and DEFINITELY not gay.

And thus the good ship BSA continued to sail for many a decade.  It should come as no surprise that being “physically strong, mentally awake, and morally straight” and spending weekends with your Dad became quite uncool over the years.  Equally uncool was the idea of spending the night in some mosquito infested park instead of hanging out at your friend’s house eating delivered pizza in the air conditioning.  When I first came to Scouting in the 1990s – no doubt partially borne from my father’s own observed “crisis in masculinity” in his overweight, clumsy, bookish son – it was clearly a social world operating under Fight Club rules: no one talked about being in Boy Scouts, no one actually wanted to be in Boy Scouts, and in fact, there IS no Boy Scouts.  My troop was populated by awkward young boys, and many of them – like me – were pushed into Scouting by their fathers as a way to bond and learn about being a man.  We learned outdoor skills to be self-sufficient.  We learned what to do in emergencies and gained a sense of agency.  We took turns being patrol leaders and learned leadership.  We even dutifully absorbed guidelines on personal hygiene, grooming, and ethics.  In some ways, you might even call Scouting “Masculinity for Dummies,” albeit a masculinity that seemed more suited for a bygone age where the square knot and orientation-by-compass were essential daily tasks.  The point was, the popular guys, the guys who got girls, the guys who were on the football team – these were NOT the guys at my troop meeting.  We were guys who knew more about Lord of the Rings than women or sports; we named our patrol after the Warg, a vicious animal from Tolkien’s series.  That is what our fathers sensed, and that is partially why we all gathered in that room on a weekly basis.

As any good sociologist knows however, norms are socially and historically contingent and what is “good, true, or possible” in a given social context will always change, if given enough time.  To be sure, the contemporary BSA experience still attempts to turn boys into normative, masculine men.  But the boundaries of normative masculinity change.  Most of us live in big cities, work for a wage, have been taught be female teachers…..and yet there is no dearth of masculine men.  While not completely normative, it’s even OK for men to be fashionable, be sensitive, be vulnerable.  Thanks to those Peter Jackson films, it might even be cool to like Lord of the Rings now!

Other things have showed less progress, however.  One of the most universal aspects of masculinity is its tendency to define itself as whatever is not feminine.  Thus misogyny and female objectification are still rife in our society, and we have Boy Scouts and Girl Scouts, not People Scouts.  Hegemonic masculinity and heterosexuality are also deeply associated.  Thus homophobia – especially among adolescent men, according to CJ Pascoe – continues to exist. On this last point however, all is not lost: Pascoe’s work on high school masculinity revealed that while a gay identity was frequently used as a feminizing epithet, attitudes towards actual gay and lesbian students were more complex and even respectful.  According to Pascoe, while calling other teenagers “fag” is a powerfully stigmatizing word used to hurt and demean, it is primarily deployed to chastise teenagers that are acting feminine instead of those who choose a gay identity.

OK, now we’re caught up to the recent kerfuffle over gays and Scouting.  Less than two weeks ago, the BSA announced a shift in their “no gays allowed” policy upheld by the Supreme Court in 2000.  Rather than a blanket “gays allowed” reversal, their shift was to be based on a quasi-“state’s rights” approach, where each local Scout council would be allowed to decide the policy that best suited their social and cultural context.  That way, the troop in San Francisco could march in the Gay Pride Parade, the troop in Oklahoma City could tell their Scouts that homosexuality was neither moral nor straight, and the BSA could wash its hands of any responsibility.  The liberals get social equality, the conservatives get the right to their own views, and the libertarians get “Big BSA” off of their backs so things can be decided at the local level.  Everyone wins, right?

If you’ve paid any attention to the “culture wars” surrounding gay marriage and abortion, you probably already know the answer: Of course not!  Progressive supporters of the change said this would revitalize the dwindling interest in Scouting; conservative opponents said this would produce a wave of departures from church sponsored troops.  Change supporters said this would create important dialogues; opponents said this would create ideological walls between troops.  The companies that use liberal ideology to sell their products cheered and gave the BSA money; the companies that use conservative ideology to sell their products jeered and threatened to deny funding.

But with our historical context and sociological imagination up and running, we can see that this is slightly more complex than the media narrative.  The Boy Scouts of America were generally founded to inculcate masculinity in boys and specifically to endorse a hegemonic masculinity that is heterosexual at best and homophobic at worst.  So when the Supreme Court or Random Conservative Pundit says that allowing gays in Scouting goes against its foundational “expressive message,” this is quite a bit of truth in this.

The rub is the aforementioned sociological truism that gender norms are dynamic, fluid, and subject to change across time.

If today’s society, today’s Boy Scout leaders, or today’s Boy Scouts decide that excluding gay people on the basis of sexual orientation is no longer acceptable, that truth is as valid and real as the “truth” of masculinity the BSA was founded upon.  If the hard fought legal battles and cultural visibility the GLBTQ community have won in the decades since Stonewall mean that homosexuality is no longer seen as immoral or unclean to today’s Boy Scouts – as evidenced by the 1.4 million signatures a group of Eagle Scouts delivered to BSA headquarters –  then that is something their leaders have to deal with honestly, responsibly, and with an open mind.

Perhaps that will still be the case even with the decision Wednesday from the BSA to have more deliberations before a final decision.  On one side stand people who no longer see a conflict between social acceptance of homosexuality and “being a man” in the year 2013.  On the other side are people who sense that something fundamental about masculinity and Scouting is changing.  Both may be right.  But as our trip through history shows, this has as much to do with masculinity and gender policing as it does with homosexuality.