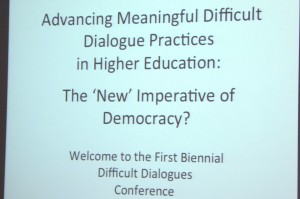 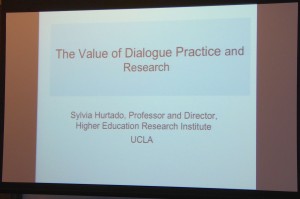 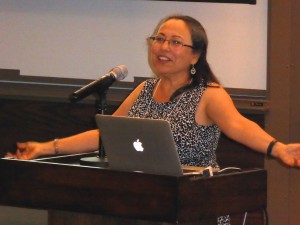 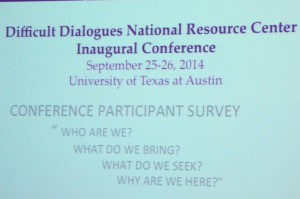 Intellectual violence in the academe is a hot topic and was the subject of an animated Sociology brownbag last year.  There was consensus about the problem, but no real solutions emerged.  So, when I signed up for the  Stop Talking – Indigenous Ways of Teaching and Learning workshop offered by the Humanities Institute, I was glad to discover valuable insights and techniques for creating civility in often heated academic discussions.

Co-presenters Ilarion (Larry) Merculief, the director of the Global Center for Indigenous Leadership and professor and Director of the University of Alaska at Anchorage’s difficult dialogues program Libby Roderick have co-authored and published two books.  The first provided the foundation for our meeting and the second, Start Talking: A Handbook for Engaging Difficult Dialogues in Higher Education is a companion piece for instructors teaching courses that deal with contentious issues. Ilarion, an Alaskan native, began by describing his life as a child growing up in a traditional aleut village. His family were hunters and fishers, members of a small Unungan community living on St. Paul Island in the Bering Sea. From an early age, the children were taught to open their minds and their senses to the earth and sea and to listen. A typical greeting, translated as “The morning tastes good,” reflects their sense of well-being living in harmony with nature. Parents allowed children the freedom to roam and they were not chastised or punished for misdeeds, but taught communal values by elders and by their Aachaa, with whom they had a special spiritual bond. Time, attention and belonging were predicated on nature, on place, and on being one of the people who kept the balance of life by honoring and protecting the earth. People spent a lot less time talking and much more listening and communicating non-verbally. The foundation for respecting all living beings was given to Ilarion along with the challenge to communicate this balance of life, self and other to non-natives.

He began with a list of values that he felt most Alaska Native cultures have in common:

Clearly, a very civil agenda and one sorely lacking in most academic discourse.  The foundation of respect comes from the knowledge that the community is completely interdependent and rooted in love of the earth.  One of the first things workshop participants were asked to do was go outside for a 10 minute exercise in listening and opening our senses to the environment. We went to the turtle pond by the main building to enjoy the beautiful day.

This re-centering  and re-energizing exercise was one suggested method for engaging the mind/body and including the heart in the conversations to follow. Giving participants a chance to reflect before answering questions and building in spaces for silence slows the pace and gives introverts more opportunities to be heard.  Another useful technique employed in the workshop was to create listening pairs, setting aside five or six minutes at a time for each person to talk about what they were learning with the other actively listening.  Research has shown that using wait time as a teaching strategy to facilitate think time produces better responses to questions. Even issues that are divisive and contentious can be discussed if we allow each person to have their own truth and we are willing to listen without formulating a response. There will be additional posts from this workshop,from the Stop Talking handbook and from the Start Talking engaging difficult dialogues handbook. The value of these lessons cannot be overestimated and I am grateful to Ilarion and to Libby for sharing their wisdom with their southern compadres.