Sarah McKinnon was a bright light at UT Austin, a talented Demographer and a devoted mother who passed away at the tragically young age of 37. She will be sorely missed by her family and friends and is remembered below in a memorial given by Dr. Joe Potter at the Population Association of America’s annual meeting in San Franciso, California this May. Sarah’s family will hold a memorial for her on June 24th at the turtle pond by the Main building at UT. Please join in celebrating her life. 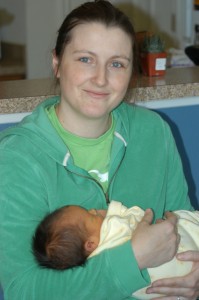 Sarah McKinnon died three weeks ago of cancer at age 37. Between 2001 and 2009, I had the privilege of being her advisor, colleague and friend while she was a graduate student and researcher at the University of Texas in Austin. Sarah grew up in western Massachusetts, was valedictorian of her high school class, spent a semester at UMass-Amherst, and then went to El Paso to join her mother and attend the University of Texas in El Paso where her mother was teaching Epidemiology. Sarah made the best of a less than challenging academic situation, and graduated at the top of her class. She then went on to get an MPH from the UT School of Public Health, studying both at the main campus in Houston and later at the satellite campus in El Paso. She then worked for a year in El Paso where in addition to other duties she served as a translator for doctor for low-income patients. From El Paso she went to Atlanta where she had a year-long internship at CDC in Maternal and Child Health.

When she applied to enter the graduate program at UT-Austin, I quickly recognized that we had many interests in common and that her background and skills would be wonderful assets for several of the projects I was involved with or had in mind. I begged her to accept our offer of admission.

While in Austin, Sarah studied, taught, worked as a programmer, and was involved with four main research areas:

1. Sarah was a pillar of the Border Contraceptive Access Study—a project based on the natural experiment that cross-border procurement of oral contraception provided in a border setting. Sarah brought much energy, deep familiarity with the low-income population of El Paso, and wonderful skills with data collection and management to this enterprise. She was also responsible for a great deal of the analysis and programming that was involved in many of the papers from that study, and was an author of three of them. And almost singlehandedly she prepared the documentation, and completed that the data cleaning that was a prerequisite for a public release of the data we collected.

2. Sarah was also an active, energetic, and wonderful collaborator with the group at UT Austin working on issues of racial and ethnic disparities in US health outcomes. Working with Parker Frisbie, Bob Hummer, and others, Sarah co-published several chapters that summarized current patterns of US health disparities, with a particular focus on infant and child outcomes. In Bob’s words: “Her work in this area was characterized by great expertise with data and methods and keen insights on the explanations underlying the disparities. And of course, Sarah’s great energy and sense of humor characterized her involvement with this research group as well.”

3. While at UT, Sarah became interested in Brazilian demography, learned some Portuguese, and took advantage of the last tier of Mellon money to spend a few months in Brazil. Together, we tackled the question of how to use the large trove of Brazilian census microdata that had been assembled at UT for the purpose of analyzing the growth of Protestantism in Brazil and its possible effects on reproductive and other behaviors. Sarah was the first author of a nice paper published in Population Studies in 2008 on “Adolescent Fertility and Religion in Rio de Janeiro”.

4. For her dissertation topic, Sarah eventually chose to learn and apply some of the Bayesian spatial statistics methods that my colleagues Renato Assuncao and Carl Schmertmann were proficient with to the task of estimating child mortality rates for all 5000 plus municipalities in Brazil. This was a daunting task that required learning a new type of statistics, mastering the use of Monte Carlo Markov Chain programs, and as well as modifying the underlying technology of Brass estimation for this purpose. But Sarah did it all, going to short courses on Winbugs at other universities, bugging Carl and Renato for help making Winbugs do what it had to do, and producing and interpreting the results. It is a pity that Sarah, Renato and Carl and I were not able to send a paper based on this work off to a journal before Sarah’s passing, but getting that done is now on our shoulders.

Shortly before she defended her dissertation, Sarah was hired by the CDC/Division of Reproductive Health in 2009 as a Statistical Data Analyst/Programmer. Sarah’s position was originally envisioned as providing programming support to CDC epidemiologists in the Maternal and Infant Health Branch, assisting them with the organization and management of complex analysis data files for various projects. Within months of being hired, Sarah became an expert on U.S. birth and death certificate files, hospital discharge data, and longitudinally linked vital statistic and administrative databases for mothers and children.

In the words of her CDC colleagues: “Sarah brought a unique mix of analytic and programming skills to the Division, and was a brilliant analyst in her own right. She not only supported projects as was originally envisioned, but she also enriched the analytic projects in which she participated. Her CDC colleagues quickly realized Sarah’s great potential. Only a year into her stint with CDC, she began participating as an advisor in numerous DRH studies.”

It is very sad for me to stand before you reading these words. Sarah was an extremely smart, dedicated, and efficient demographer, and a lovely person. I owe a great debt to her for all that she did for the projects I was involved in, and for the opportunity to work alongside her analyzing demographic data. She had a promising career in front of her, and I expected to be her colleague for many years to come. I, and many others at the PRC, CDC, and PAA will miss her greatly. When I last saw her at her mother’s home in Tampa on March 25th, she said she was sorry she would not be at PAA this year, and I am glad that we all have this opportunity to remember her tonight.